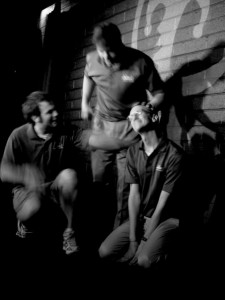 The first principle of improv is listening. Listening in improv is one of the more difficult principles to learn because it appears to be so contrary to what you see on stage. When you watch improv comedy you think, “They’re so quick and know what to say at just the right time”. This leads to the belief that improvisors are constantly thinking ahead of what to say or that they are inserting quick one liners just at the right time. In truth, it is the opposite of that, the best improv is done by listening to what your scene partner is saying (Hyper-Listening), and then respond to what is said. There is suppose to be little or no planning a head, but rather responding to what is happening in the scene.

But it doesn’t stop there. Listening is much more finite then that… There is more then just listening to the words that are being said, there is also listening to the physical, emotion, intent and need.

1. Listening to Physicality – 93% of communication is non-verbal. It is important to pay attention to physical communication. What is this person saying with their physicality. They way they are standing, their facial expression, their mannerisms and the way they move on the stage.